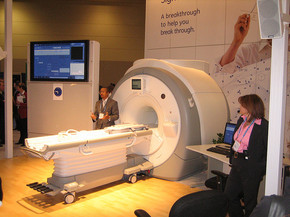 An MRI scanner is a tube in which the patient lies inside and is surrounded by a large, powerful magnet where the magnetic field is used to align the magnetization of some atomic nuclei in the body, and radio frequency fields to systematically alter the alignment of this magnetization. This causes the nuclei to produce a rotating magnetic field detectable by the scanner—and this information is recorded to construct an image of the scanned area of the body. Magnetic field gradients cause nuclei at different locations to rotate at different speeds. By using gradients in different directions 2D images or 3D volumes can be obtained in any arbitrary orientation.

MRI provides good contrast between the different soft tissues of the body, which makes it especially useful in imaging the brain, muscles, the heart, and cancers compared with other medical imaging techniques such as computed tomography (CT) or X-rays. Unlike CT scans or traditional X-rays, MRI does not use ionizing radiation

Information about the origin of the signal in 3D space can be learned by applying additional magnetic fields during the scan. This is the idea of K-space, 3d image compiled from multiple 2d images. This 3d image can also produce images in any plane of view. The image can be rotated and manipulated by the doctor to be better able to detect tiny changes of structures within the body. These fields, generated by passing electric currents through gradient coils, make the magnetic field strength vary depending on the position within the magnet. Because this makes the frequency of the released radio signal also dependent on its origin in a predictable manner, the distribution of protons in the body can be mathematically recovered from the signal, typically by the use of the inverse Fourier transform.

Protons in different tissues return to their equilibrium state at different relaxation rates. Different tissue variables, including spin density, T1 and T2 relaxation times, and flow and spectral shifts can be used to construct images. By changing the settings on the scanner, this effect is used to create contrast between different types of body tissue or between other properties, as in fMRI and diffusion MRI.

MRI contrast agents may be injected intravenously to enhance the appearance of blood vessels, tumors or inflammation. Contrast agents may also be directly injected into a joint in the case of arthrograms, MRI images of joints. Unlike CT, MRI uses no ionizing radiation and is generally a very safe procedure. Nonetheless the strong magnetic fields and radio pulses can affect metal implants, including cochlear implants and cardiac pacemakers. In the case of cochlear implants, the US FDA has approved some implants for MRI compatibility. In the case of cardiac pacemakers, the results can sometimes be lethal, so patients with such implants are generally not eligible for MRI.

Since the gradient coils are within the bore of the scanner, there are large forces between them and the main field coils, producing most of the noise that is heard during operation. Without efforts to damp this noise, it can approach 130 decibels (dB) with strong fields (see also the subsection on acoustic noise).

MRI is used to image every part of the body, and is particularly useful for tissues with many hydrogen nuclei and little density contrast, such as the brain, muscle, connective tissue and most tumors.

MRI scans require a magnetic field with two properties, uniform field density and strength. The magnetic field cannot vary more than 1/10,000 of 1% and the field must (depending on the scanner) be anywhere from .5 to 3 Tesla in strength. The only magnets which satisfy both of these properties at the same time are superconducting magnets. In 2001, a research team at Stanford invented a new technique which came to be called "Prepolarized MRI" or PMRI. Inspired by professor emeritus Albert Macovski and led by then senior research associate Stephen Connolly and engineering research associate Greig Scott, the team demonstrated that the magnets don't have to be both uniform and strong, rather two magnets can be used together where one is strong and one is uniform.

The first magnet in a PMRI scanner is strong, but not uniform. This magnet creates a very strong magnetic field which varies in uniformity by as much as 40%. This is the "prepolarize" component. A second much weaker (only requiring the electric power necessary to run two hairdryers) but far more precise magnet then creates a homogenous magnetic field. These two magnets can be ordinary copper wound magnets, which greatly lowers the cost of an MRI scanner.[14] Because the magnetic field is "tuned" by the second magnet, a PMRI scan can be obtained immediately adjacent to a metal prosthetic, unlike an MRI scan 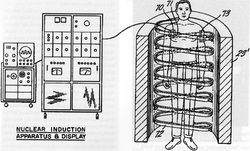 In the 1950s, Herman Carr reported on the creation of a one-dimensional MRI image. Paul Lauterbur expanded on Carr's technique and developed a way to generate the first MRI images, in 2D and 3D, using gradients. In 1973, Lauterbur published the first nuclear magnetic resonance image. and the first cross-sectional image of a living mouse was published in January 1974. Nuclear magnetic resonance imaging is a relatively new technology first developed at the University of Nottingham, England. Peter Mansfield, a physicist and professor at the university, then developed a mathematical technique that would allow scans to take seconds rather than hours and produce clearer images than Lauterbur had.


Raymond Damadian's "Apparatus and method for detecting cancer in tissue."
In a 1971 paper in the journal Science, Dr. Raymond Damadian, an Armenian-American physician, scientist, and professor at the Downstate Medical Center State University of New York (SUNY), reported that tumors and normal tissue can be distinguished in vivo by nuclear magnetic resonance ("NMR"). He suggested that these differences could be used to diagnose cancer, though later research would find that these differences, while real, are too variable for diagnostic purposes. Damadian's initial methods were flawed for practical use, relying on a point-by-point scan of the entire body and using relaxation rates, which turned out to not be an effective indicator of cancerous tissue.

While researching the analytical properties of magnetic resonance, Damadian created the world's first magnetic resonance imaging machine in 1972. He filed the first patent for an MRI machine, U.S. patent #3,789,832 on March 17, 1972, which was later issued to him on February 5, 1974. As the National Science Foundation notes, "The patent included the idea of using NMR to 'scan' the human body to locate cancerous tissue."However, it did not describe a method for generating pictures from such a scan or precisely how such a scan might be done. Damadian along with Larry Minkoff and Michael Goldsmith, subsequently went on to perform the first MRI body scan of a human being on July 3, 1977. These studies performed on humans were published in 1977.