There are two general categories of imaging with the high-energy photons produced by X-ray tubes. With either method, image information is obtained in the form of shadows cast in a uniform X-ray beam through differential attenuation by materials in the body that
vary in thickness, density, or chemical composition (i.e. atomic number), leading to the creation of a two-dimensional X-ray shadowgram by tissues actually distributed in three dimensions. The first, in the form either of conventional radiography or of fluoroscopy, displays the resulting shadow information directly on a flat image receptor (such as a screen-film cassette, fluoroscopic image-intensifier tube plus electronic optical camera combination, or digital solid-state flat-panel imager) as a planar (flat), two-dimensional image. The second, X-ray transmission CT, captures the shadow with a bank of tiny radiation detectors, and then reconstructs the data to produce a true three-dimensional representation of the internal structures of the body – although clinical images are traditionally presented as transverse or other pancake-like tissue slices. 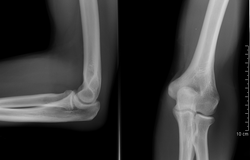 X-ray photons used for medical purposes are formed by an event involving an electron, while gamma ray photons are formed from an interaction with the nucleus of an atom.[2] In general, medical radiography is done using X-rays formed in an X-ray tube. Nuclear medicine typically involves gamma rays.

The types of electromagnetic radiation of most interest to radiography are X-ray and gamma radiation. This radiation is much more energetic than the more familiar types such as radio waves and visible light. It is this relatively high energy which makes gamma rays useful in radiography but potentially hazardous to living organisms.


Radiographs of the Darwinius fossil Ida.
The radiation is produced by X-ray tubes, high energy X-ray equipment or natural radioactive elements, such as radium and radon, and artificially produced radioactive isotopes of elements, such as cobalt-60 and iridium-192. Electromagnetic radiation consists of oscillating electric and magnetic fields, but is generally depicted as a single sinusoidal wave. While in the past radium and radon have both been used for radiography, they have fallen out of use as they are radiotoxic alpha radiation emitters which are expensive; iridium-192 and cobalt-60 are far better photon sources. For further details see commonly used gamma emitting isotopes.

Gamma rays are indirectly ionizing radiation. A gamma ray passes through matter until it undergoes an interaction with an atomic particle, usually an electron. During this interaction, energy is transferred from the gamma ray to the electron, which is a directly ionizing particle. As a result of this energy transfer, the electron is liberated from the atom and proceeds to ionize matter by colliding with other electrons along its path. Other times, the passing gamma ray interferes with the orbit of the electron, and slows it, releasing energy but not becoming dislodged. The atom is not ionised, and the gamma ray continues on, although at a lower energy. This energy released is usually heat or another, weaker photon, and causes biological harm as a radiation burn. The chain reaction caused by the initial dose of radiation can continue after exposure, much like a sunburn continues to damage skin even after one is out of direct sunlight.

For the range of energies commonly used in radiography, the interaction between gamma rays and electrons occurs in two ways. One effect takes place where all the gamma ray's energy is transmitted to an entire atom. The gamma ray no longer exists and an electron emerges from the atom with kinetic (motion in relation to force) energy almost equal to the gamma energy. This effect is predominant at low gamma energies and is known as the photoelectric effect. The other major effect occurs when a gamma ray interacts with an atomic electron, freeing it from the atom and imparting to it only a fraction of the gamma ray's kinetic energy. A secondary gamma ray with less energy (hence lower frequency) also emerges from the interaction. This effect predominates at higher gamma energies and is known as the Compton effect.

In both of these effects the emergent electrons lose their kinetic energy by ionizing surrounding atoms. The density of ions so generated is a measure of the energy delivered to the material by the gamma rays.

The most common means of measuring the variations in a beam of radiation is by observing its effect on a photographic film. This effect is the same as that of light, and the more intense the radiation is, the more it darkens, or exposes, the film. Other methods are in use, such as the ionizing effect measured electronically, its ability to discharge an electrostatically charged plate or to cause certain chemicals to fluoresce as in fluoroscopy.

Simplified X-ray tube with a rotating anode and a heated filament. 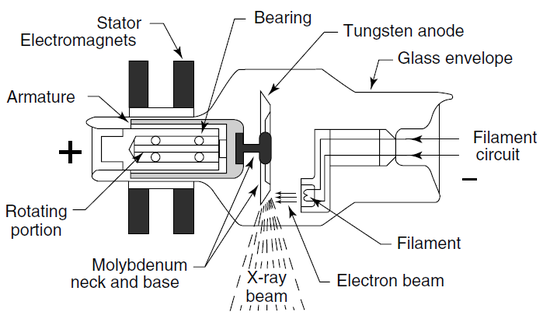