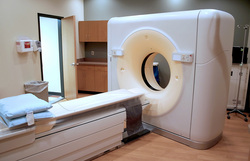 CT produces a volume of data that can be manipulated, through a process known as "windowing", in order to demonstrate various bodily structures based on their ability to block the X-ray beam. Although historically the images generated were in the axial or transverse plane, perpendicular to the long axis of the body, modern scanners allow this volume of data to be reformatted in various planes or even as volumetric (3D) representations of structures. Although most common in medicine, CT is also used in other fields, such as nondestructive materials testing. Another example is archaeological uses such as imaging the contents of sarcophagi.

Usage of CT has increased dramatically over the last two decades in many countries. An estimated 72 million scans were performed in the United States in 2007. It is estimated that 0.4% of current cancers in the United States are due to CTs performed in the past and that this may increase to as high as 1.5-2% with 2007 rates of CT usage; however, this estimate is disputed.

Spinning tube, commonly called spiral CT, or helical CT in which an entire X-ray tube is spun around the central axis of the area being scanned. These are the dominant type of scanners on the market because they have been manufactured longer and offer lower cost of production and purchase. The main limitation of this type is the bulk and inertia of the equipment (X-ray tube assembly and detector array on the opposite side of the circle) which limits the speed at which the equipment can spin.

Electron beam tomography is a specific form of CT in which a large enough X-ray tube is constructed so that only the path of the electrons, traveling between the cathode and anode of the X-ray tube, are spun using deflection coils. This type has a major advantage since sweep speeds can be much faster, allowing for less blurry imaging of moving structures, such as the heart and arteries. However, far fewer CTs of this design have been produced, mainly due to the higher cost associated with building a much larger X-ray tube and detector array.

There are several advantages that CT has over traditional 2D medical radiography. First, CT completely eliminates the superimposition of images of structures outside the area of interest. Second, because of the inherent high-contrast resolution of CT, differences between tissues that differ in physical density by less than 1% can be distinguished. Finally, data from a single CT imaging procedure consisting of either multiple contiguous or one helical scan can be viewed as images in the axial, coronal, or sagittal planes, depending on the diagnostic task. This is referred to as multiplanar reformatted imaging.
CT is regarded as a moderate- to high-radiation diagnostic technique. The improved resolution of CT has permitted the development of new investigations, which may have advantages; compared to conventional radiography, for example, CT angiography avoids the invasive insertion of a catheter. CT Colonography (also known as Virtual Colonoscopy or VC for short) may be as useful as a barium enema for detection of tumors, but may use a lower radiation dose. CT VC is increasingly being used in the UK as a diagnostic test for bowel cancer and can negate the need for a colonoscopy.

The radiation dose for a particular study depends on multiple factors: volume scanned, patient build, number and type of scan sequences, and desired resolution and image quality. In addition, two helical CT scanning parameters that can be adjusted easily and that have a profound effect on radiation dose are tube current and pitch. Computed tomography (CT) scan has been shown to be more accurate than radiographs in evaluating anterior interbody fusion but may still over-read the extent of fusion.

CT scans use a high level of ionizing radiation. Ionizing radiation have the capacity to break molecular bonds, and thus alter the molecular structure of the irradiated molecules. The human body cells operation is controlled by the chemical structure of the DNA molecule, that they include. Experiments showed that ionizing radiation cause DNA double strand breaks at a rate of 35 double strand breaks per cell per Gray, and removes a portion of the epigenetic markers of the DNA,which regulate the gene expression. At the radiation doses, which typical CT scans impose, a DNA molecule of 40%-100% of the irradiated cells is damaged by one or more double strand breaks. This insult is followed by an effort of the cell in attempt to repair the damaged and broken DNA, however, the repair process is not perfect, and faults that are not properly repaired can cause the cell to stray from its original design of operation. The improper operation can manifest in cell death, cancer, and in other puzzling health conditions, as can be expected from an operation, which randomly alter cell's DNA, and epigenetic markers.A portion of the population possess a flawed DNA repair mechanism, and thus suffer a greater insult due to exposure to radiation. Unlike CT, MRI does not use ionizing radiation, and does not cause double strand breaks to the DNA.

The FDA and CRCPD have recommended to use less than 500 mGy in brain perfusion CT scans, a scan which is commonly performed in the investigation of suspected stroke, and a dose that is sufficient to induce 17 double strand breaks in each cell of the brain. The recommendation was made in response to multiple complaints from patients over a loss of a band of their head's hair, which was traced to be due to CT scans of higher doses, that were performed over them.

The increased use of CT scans has been the greatest in two fields: screening of adults (screening CT of the lung in smokers, virtual colonoscopy, CT cardiac screening, and whole-body CT in asymptomatic patients) and CT imaging of children. Shortening of the scanning time to around 1 second, eliminating the strict need for the subject to remain still or be sedated, is one of the main reasons for the large increase in the pediatric population (especially for the diagnosis of appendicitis). CT scans of children have been estimated to produce non-negligible increases in the probability of lifetime cancer mortality, leading to calls for the use of reduced current settings for CT scans of children.

These calculations are based on similar radiation exposures experienced by those present during the atomic bomb explosions in Japan during the second world war and nuclear industry works. Estimated lifetime cancer mortality risks attributable to the radiation exposure from a CT in a 1-year-old are 0.18% (abdominal) and 0.07% (head) — an order of magnitude higher than for adults — although those figures still represent a small increase in cancer mortality over the background rate. In the United States, of approximately 600,000 abdominal and head CT examinations annually performed in children under the age of 15 years, a rough estimate is that 500 of these individuals might ultimately die from cancer attributable to the CT radiation. The additional risk is still low: 0.35% compared to the background risk of dying from cancer of 23%. However, if these statistics are extrapolated to the current number of CT scans, the additional rise in cancer mortality could be 1.5 to 2%. Furthermore, certain conditions can require children to be exposed to multiple CT scans.

In 2009, a number of studies that further defined the risk of cancer that may be caused by CT scans appeared. One study indicated that radiation by CT scans is often higher and more variable than cited, and each of the 19,500 CT scans that are daily performed in the US is equivalent to 30 to 442 chest X-rays in radiation. It has been estimated that CT radiation exposure will result in 29,000 new cancer cases just from the CT scans performed in 2007. The most common cancers caused by CT are thought to be lung cancer, colon cancer and leukemia, with younger people and women more at risk. These conclusions, however, are criticized by the American College of Radiology (ACR), which maintains that the life expectancy of CT scanned patients is not that of the general population and that the model of calculating cancer is based on total-body radiation exposure and thus faulty.

CT scans can be performed with different settings for lower exposure in children, although these techniques are often not employed. Surveys have suggested that, at the current time, many CT scans are performed unnecessarily. Ultrasound scanning or magnetic resonance imaging are alternatives (for example, in appendicitis or brain imaging) without the risk of radiation exposure. Although CT scans come with an additional risk of cancer (it can be estimated that the radiation exposure from a full body scan is the same as standing 2.4 km away from the World War II atomic bomb blasts in Japan, especially in children, the benefits that stem from their use outweigh the risk in many cases. Studies support informing parents of the risks of pediatric CT scanning. 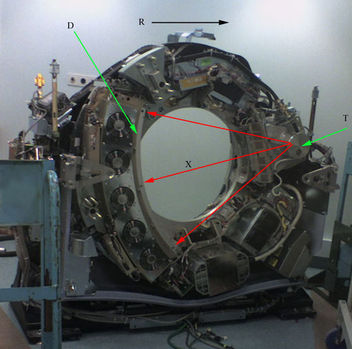 A modern (2006) CT scanner with the cover removed, demonstrating the principle of operation. The X-ray tube and the detectors are mounted on a ring shaped gantry. The patient lies in the center of the gantry while the gantry rotates around them.

This arrangement, a broad fan-shaped X-ray beam with rotating source and detectors, is the 'third-generation' configuration.

This scanner is capable of helical scanning - the gantry is able to rotate freely while the patient moves continuously through the plane of the scan. Power (up to 100 kW) and data (up to 5 Gbps) are transferred to and from the gantry using slip rings.