Nuclear medicine is a medical specialty involving the application of radioactive substances in the diagnosis and treatment of disease.

In nuclear medicine procedures, radionuclides are combined with other elements to form chemical compounds, or else combined with existing pharmaceutical compounds, to form radiopharmaceuticals. These radiopharmaceuticals, once administered to the patient, can localize to specific organs or cellular receptors. This property of radiopharmaceuticals allows nuclear medicine the ability to image the extent of a disease-process in the body, based on the cellular function and physiology, rather than relying on physical changes in the tissue anatomy. In some diseases nuclear medicine studies can identify medical problems at an earlier stage than other diagnostic tests. Nuclear medicine, in a sense, is "radiology done inside out" or "endo-radiology" because it records radiation emitting from within the body rather than radiation that is generated by external sources like X-rays.
Treatment of diseased tissue, based on metabolism or uptake or binding of a particular ligand, may also be accomplished, similar to other areas of pharmacology. However, the treatment effects of radiopharmaceuticals rely on the tissue-destructive power of short-range ionizing radiation.

In the future, nuclear medicine may provide added impetus to the field known as molecular medicine. As understanding of biological processes in the cells of living organism expands, specific probes can be developed to allow visualization, characterization, and quantification of biologic processes at the cellular and subcellular levels.[1] Nuclear medicine is a possible specialty for adapting to the new discipline of molecular medicine, because of its emphasis on function and its utilization of imaging agents that are specific for a particular disease process.

Radionuclide therapy can be used to treat conditions such as hyperthyroidism, thyroid cancer, and blood disorders.

In nuclear medicine therapy, the radiation treatment dose is administered internally (e.g. intravenous or oral routes) rather from an external radiation source.

The radiopharmaceuticals used in nuclear medicine therapy emit ionizing radiation that travels only a short distance, thereby minimizing unwanted side effects and damage to noninvolved organs or nearby structures. Most nuclear medicine therapies can be performed as outpatient procedures since there are few side effects from the treatment and the radiation exposure to the general public can be kept within a safe limit.

In nuclear medicine imaging, radiopharmaceuticals are taken internally, for example intravenously or orally. Then, external detectors (gamma cameras) capture and form images from the radiation emitted by the radiopharmaceuticals. This process is unlike a diagnostic X-ray where external radiation is passed through the body to form an image.
There are several techniques of diagnostic nuclear medicine. 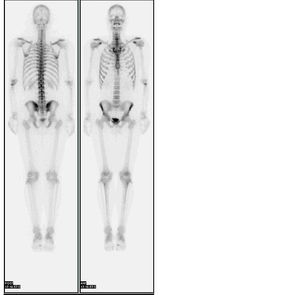 The nuclear medicine whole body bone scan is generally used in evaluations of various bone related pathology, such as for bone pain, stress fracture, nonmalignant bone lesions, bone infections, or the spread of cancer to the bone. 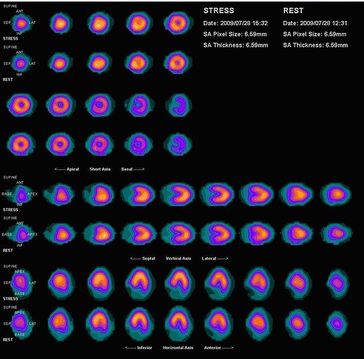 with Thallium-201 for the rest images (bottom rows) and Tc-Sestamibi for the stress images (top rows). The nuclear medicine myocardial perfusion scan plays a pivotal role in the noninvasive evaluation of coronary artery disease. The study not only identifies patients with coronary artery disease, it also provides overall prognostic information or overall risk of adverse cardiac events for the patient. 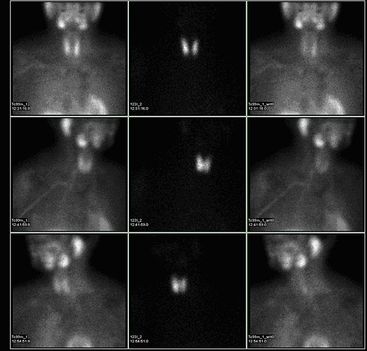 demonstrates a parathyroid adenoma adjacent to the left inferior pole of the thyroid gland. The above study was performed with Technetium-Sestamibi (1st column) and Iodine-123 (2nd column) simultaneous imaging and the subtraction technique (3rd column). 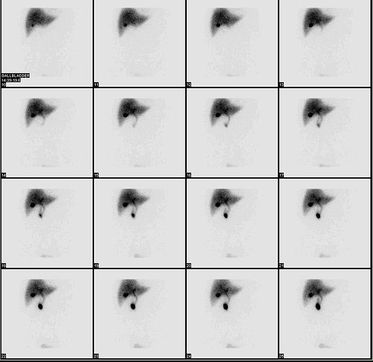 The nuclear medicine V/Q scan is useful in the evaluation of pulmonary embolism. 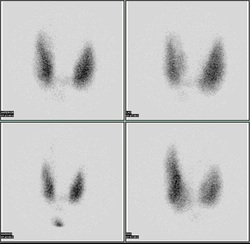 Thyroid scan with Iodine-123 for evaluation of hyperthyroidism. 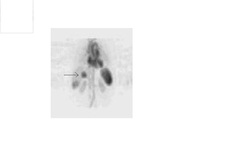 A nuclear medicine SPECT liver scan with technetium-99m labeled autologous red blood cells. A focus of high uptake (arrow) in the liver is consistent with a hemangioma.

The history of nuclear medicine

The origins of this medical idea date back as far as the mid-1920s in Freiburg, Germany, when George de Hevesy made experiments with radionuclides administered to rats, thus displaying metabolic pathways of these substances and establishing the tracer principle. Possibly, the genesis of this medical field took place in 1936, when John Lawrence, known as "the father of nuclear medicine", took a leave of absence from his faculty position at Yale Medical School, to visit his brother Ernest Lawrence at his new radiation laboratory (now known as the Lawrence Berkeley National Laboratory) in Berkeley, California. Later on, John Lawrence made the first application in patients of an artificial radionuclide when he used phosphorus-32 to treat leukemia.

Many historians consider the discovery of artificially produced radionuclides by Frédéric Joliot-Curie and Irène Joliot-Curie in 1934 as the most significant milestone in nuclear medicine.[4] In February 1934, they reported the first artificial production of radioactive material in the journal Nature, after discovering radioactivity in aluminum foil that was irradiated with a polonium preparation. Their work built upon earlier discoveries by Wilhelm Konrad Roentgen for X-ray, Henri Becquerel for radioactive uranium salts, and Marie Curie (mother of Irene Curie) for radioactive thorium, polonium and coining the term "radioactivity." Taro Takemi studied the application of nuclear physics to medicine in the 1930s. The history of nuclear medicine will not be complete without mentioning these early pioneers.

Nuclear medicine gained public recognition as a potential specialty on December 7, 1946 when an article was published in the Journal of the American Medical Association by Sam Seidlin. The article described a successful treatment of a patient with thyroid cancer metastases using radioiodine (I-131). This is considered by many historians as the most important article ever published in nuclear medicine. Although, the earliest use of I-131 was devoted to therapy of thyroid cancer, its use was later expanded to include imaging of the thyroid gland, quantification of the thyroid function, and therapy for hyperthyroidism.
Widespread clinical use of nuclear medicine began in the early 1950s, as knowledge expanded about radionuclides, detection of radioactivity, and using certain radionuclides to trace biochemical processes. Pioneering works by Benedict Cassen in developing the first rectilinear scanner and Hal O. Anger's scintillation camera (Anger camera) broadened the young discipline of nuclear medicine into a full-fledged medical imaging specialty.

In these years of nuclear medicine, the growth was phenomenal. The Society of Nuclear Medicine was formed in 1954 in Spokane, Washington, USA. In 1960, the Society began publication of the Journal of Nuclear Medicine, the premier scientific journal for the discipline in America. There was a flurry of research and development of new radionuclides and radiopharmaceuticals for use with the imaging devices and for in-vitro studies.

Among many radionuclides that were discovered for medical-use, none were as important as the discovery and development of Technetium-99m. It was first discovered in 1937 by C. Perrier and E. Segre as an artificial element to fill space number 43 in the Periodic Table. The development of a generator system to produce Technetium-99m in the 1960s became a practical method for medical use. Today, Technetium-99m is the most utilized element in nuclear medicine and is employed in a wide variety of nuclear medicine imaging studies.

By the 1970s most organs of the body could be visualized using nuclear medicine procedures. In 1971, American Medical Association officially recognized nuclear medicine as a medical specialty.[8] In 1972, the American Board of Nuclear Medicine was established, cementing nuclear medicine as a stand-alone medical specialty.
In the 1980s, radiopharmaceuticals were designed for use in diagnosis of heart disease. The development of single photon emission computed tomography (SPECT), around the same time, led to three-dimensional reconstruction of the heart and establishment of the field of nuclear cardiology.

More recent developments in nuclear medicine include the invention of the first positron emission tomography scanner (PET). The concept of emission and transmission tomography, later developed into single photon emission computed tomography (SPECT), was introduced by David E. Kuhl and Roy Edwards in the late 1950s[citation needed]. Their work led to the design and construction of several tomographic instruments at the University of Pennsylvania. Tomographic imaging techniques were further developed at the Washington University School of Medicine. These innovations led to fusion imaging with SPECT and CT by Bruce Hasegawa from University of California San Francisco (UCSF), and the first PET/CT prototype by D. W. Townsend from University of Pittsburgh in 1998[citation needed].

PET and PET/CT imaging experienced slower growth in its early years owing to the cost of the modality and the requirement for an on-site or nearby cyclotron. However, an administrative decision to approve medical reimbursement of limited PET and PET/CT applications in oncology has led to phenomenal growth and widespread acceptance over the last few years, which also was facilitated by establishing 18F-labelled tracers for standard procedures, allowing work at non-cyclotron-equipped sites. PET/CT imaging is now an integral part of oncology for diagnosis, staging and treatment monitoring. A fully integrated MRI/PET scanner is on the market from early 2011.