Ultrasound is the name given to high frequency sound waves, over 20.000 cycles per second (20kHz). These waves inaudible to humans, can be transmitted in
beams and are used to scan the tissues of human body.

Ultrasound pulses of the type produced by the medical scanners are of frequency from 2 to 10MHz. Piezoelectric transducers generate ultrasound waves, which is capable of changing signals in to mechanical (Ultrasound) waves.

Common Glossary used by ultrasonologists:-
Acoustic beam- The beam of ultrasound waves (energy) provided by the transducer (Probe).Acoustic enhancement - The increased echogenicity (Echo brightness – White colour on USG) of tissues that lie behind a structure that causes little or no attenuation of ultrasound waves, such as fluid filled cysts. The opposite of acoustic enhancement is acoustic shadowing.

Acoustic shadowing - The decreased echogenicity of tissues (black colour on USG) that lie behind a structure that causes marked attenuation of the  ultrasound waves.

Anechoic (Anechogenic)- Without echoes: echofree. For example normal urine,bile and transudate pleural effusion are anechogenic i.e. they have no internal echoes. (Appearance is completely black on Ultrasound machine).

Coupling Agent- A liquid or gel used to fill gap between the skin and the ultrasound transducer, so that there is no intervening air to interfere with ultrasound transmission.
Hyperechogenic- (Hyperechoic) Describes tissue that create brighter echoes than adjacent tissues. e.g. bone, perirenal fat, wall of gall bladder and cirrhotic liver (compared with normal liver) and air bronchogram in pneumonic consolidation.

Typical diagnostic sonographic scanners operate in the frequency range of 2 to 18 megahertz, though frequencies up to 50–100 megahertz have been used experimentally in a technique known as biomicroscopy in special regions, such as the anterior chamber of the eye.[citation needed] The choice of frequency is a trade-off between spatial resolution of the image and imaging depth: lower frequencies produce less resolution but image deeper into the body. Higher frequency sound waves have a smaller wavelength and thus are capable of reflecting or scattering from smaller structures. Higher frequency sound waves also have a larger attenuation coefficient and thus are more readily absorbed in tissue, limiting the depth of penetration of the sound wave into the body.

Sonography (ultrasonography) is widely used in medicine. It is possible to perform both diagnosis and therapeutic procedures, using ultrasound to guide interventional procedures (for instance biopsies or drainage of fluid collections). Sonographers are medical professionals who perform scans which are then typically interpreted by Radiologists, physicians who specialize in the application and interpretation of a wide variety of medical imaging modalities, or by Cardiologists in the case of cardiac ultrasonography (echocardiography). Sonographers typically use a hand-held probe (called a transducer) that is placed directly on and moved over the patient.

Sonography is effective for imaging soft tissues of the body. Superficial structures such as muscles, tendons, testes, breast and the neonatal brain are imaged at a higher frequency (7–18 MHz), which provides better axial and lateral resolution. Deeper structures such as liver and kidney are imaged at a lower frequency 1–6 MHz with lower axial and lateral resolution but greater penetration.

Sound in the body

Ultrasonography (sonography) uses a probe containing multiple acoustic transducers to send pulses of sound into a material. Whenever a sound wave encounters a material with a different density (acoustical impedance), part of the sound wave is reflected back to the probe and is detected as an echo. The time it takes for the echo to travel back to the probe is measured and used to calculate the depth of the tissue interface causing the echo. The greater the difference between acoustic impedances, the larger the echo is. If the pulse hits gases or solids, the density difference is so great that most of the acoustic energy is reflected and it becomes impossible to see deeper.

The frequencies used for medical imaging are generally in the range of 1 to 18 MHz. Higher frequencies have a correspondingly smaller wavelength, and can be used to make sonograms with smaller details. However, the attenuation of the sound wave is increased at higher frequencies, so in order to have better penetration of deeper tissues, a lower frequency (3–5 MHz) is used.

Seeing deep into the body with sonography is very difficult. Some acoustic energy is lost every time an echo is formed, but most of it (approximately ) is lost from acoustic absorption.

The speed of sound varies as it travels through different materials, and is dependent on the acoustical impedance of the material. However, the sonographic instrument assumes that the acoustic velocity is constant at 1540 m/s. An effect of this assumption is that in a real body with non-uniform tissues, the beam becomes somewhat de-focused and image resolution is reduced.

To generate a 2D-image, the ultrasonic beam is swept. A transducer may be swept mechanically by rotating or swinging. Or a 1D phased array transducer may be used to sweep the beam electronically. The received data is processed and used to construct the image. The image is then a 2D representation of the slice into the body.

3D images can be generated by acquiring a series of adjacent 2D images. Commonly a specialised probe that mechanically scans a conventional 2D-image transducer is used. However, since the mechanical scanning is slow, it is difficult to make 3D images of moving tissues. Recently, 2D phased array transducers that can sweep the beam in 3D have been developed. These can image faster and can even be used to make live 3D images of a beating heart.

Doppler ultrasonography is used to study blood flow and muscle motion. The different detected speeds are represented in color for ease of interpretation, for example leaky heart valves: the leak shows up as a flash of unique color. Colors may alternatively be used to represent the amplitudes of the received echoes.

Sonography can be enhanced with Doppler measurements, which employ the Doppler effect to assess whether structures (usually blood) are moving towards or away from the probe, and its relative velocity. By calculating the frequency shift of a particular sample volume, for example flow in an artery or a jet of blood flow over a heart valve, its speed and direction can be determined and visualised. This is particularly useful in cardiovascular studies (sonography of the vascular system and heart) and essential in many areas such as determining reverse blood flow in the liver vasculature in portal hypertension. The Doppler information is displayed graphically using spectral Doppler, or as an image using color Doppler (directional Doppler) or power Doppler (non directional Doppler). This Doppler shift falls in the audible range and is often presented audibly using stereo speakers: this produces a very distinctive, although synthetic, pulsating sound.

Most modern sonographic machines use pulsed Doppler to measure velocity. Pulsed wave machines transmit and receive series of pulses. The frequency shift of each pulse is ignored, however the relative phase changes of the pulses are used to obtain the frequency shift (since frequency is the rate of change of phase). The major advantages of pulsed Doppler over continuous wave is that distance information is obtained (the time between the transmitted and received pulses can be converted into a distance with knowledge of the speed of sound) and gain correction is applied. The disadvantage of pulsed Doppler is that the measurements can suffer from aliasing. The terminology "Doppler ultrasound" or "Doppler sonography", has been accepted to apply to both pulsed and continuous Doppler systems despite the different mechanisms by which the velocity is measured.

It should be noted here that there are no standards for the display of color Doppler. Some laboratories show arteries as red and veins as blue, as medical illustrators usually show them, even though some vessels may have portions flowing towards and portions flowing away from the transducer. This results in the illogical appearance of a vessel being partly a vein and partly an artery. Other laboratories use red to indicate flow toward the transducer and blue away from the transducer. Still other laboratories prefer to display the sonographic Doppler color map more in accord with the prior published physics with the red shift representing longer waves of echoes (scattered) from blood flowing away from the transducer; and with blue representing the shorter waves of echoes reflecting from blood flowing toward the transducer. Because of this confusion and lack of standards in the various laboratories, the sonographer must understand the underlying acoustic physics of color Doppler and the physiology of normal and abnormal blood flow in the human body 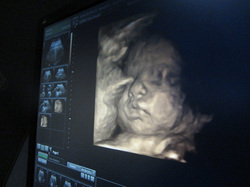 There are several different scanning modes in medical and obstetric ultrasound. The standard common obstetric diagnostic mode is 2D scanning. In 3D fetal scanning, however, instead of the sound waves being sent straight down and reflected back, they are sent at different angles. The returning echoes are processed by a sophisticated computer program resulting in a reconstructed three dimensional volume image of fetus's surface or internal organs, in much the same way as a CT scan machine constructs a CT scan image from multiple x-rays. 3D ultrasounds allow one to see width, height and depth of images in much the same way as 3D movies but no movement is shown.

3D ultrasound was first developed by Olaf von Ramm and Stephen Smith at Duke University in 1987.

Clinical use of this technology is an area of intense research activity especially in fetal anomaly scanning but there are also popular uses that have been shown to improve fetal-maternal bonding. 4D fetal ultrasounds are similar to 3D scans, with the difference associated with time: 4D allows a 3-dimensional picture in real time, rather than delayed, due to the lag associated with the computer constructed image, as in classic 3-dimensional ultrasound.

If the system is used only in the Obstetrics Application, the ultrasound energy is limited by the manufacturer below FDA limits for obstetrical ultrasound, whether scanning 2, 3 or 4 dimensionally. (The FDA limit for obstetrical ultrasound is 94 mW/cm2.) While there has been no conclusive evidence for harmful effects of 3D ultrasounds on a developing fetus, there still remains controversy over its use in non-medical situations, and generally, the AIUM recommends that 3D ultrasounds should be undertaken with the understanding that a risk may exist.