Mammography is the process of using low-energy-X-rays (usually around 30 kVp) to examine the human breast and is used as a diagnostic and a screening tool. The goal of mammography is the early detection of breast cancer, typically through detection of characteristic masses and/or microcalcifications. Most doctors believe that mammography reduces deaths from breast cancer, although a minority do not[citation needed].
In many countries routine mammography of older women is encouraged as a screening method to diagnose early breast cancer. In 2009, the U.S. Preventive Services Task Force (USPSTF) recommended that women with no risk factors have screening mammographies every 2 years between age 50 and 74. They found that the information was insufficient to recommend for or against screening between age 40 and 49 or above age 74. Altogether clinical trials have found a relative reduction in breast cancer mortality of 20%.Some doctors believe that mammographies do not reduce deaths from breast cancer, or at least that the evidence does not demonstrate it.

Like all x-rays, mammograms use doses of ionizing radiation to create images. Radiologists then analyze the image for any abnormal findings. It is normal to use lower energy X-rays (typically Mo-K) than those used for radiography of bones.


At this time, mammography along with physical breast examination is the modality of choice for screening for early breast cancer. Ultrasound, ductography, positron emission mammography (PEM), and magnetic resonance imaging are adjuncts to mammography. Ultrasound is typically used for further evaluation of masses found on mammography or palpable masses not seen on mammograms. Ductograms are still used in some institutions for evaluation of bloody nipple discharge when the mammogram is non-diagnostic. MRI can be useful for further evaluation of questionable findings as well as for screening pre-surgical evaluation in patients with known breast cancer to detect any additional lesions that might change the surgical approach, for instance from breast-conserving lumpectomy to mastectomy. New procedures, not yet approved for use in the general public, including breast tomosynthesis may offer benefits in years to come.

Breast self-examination (BSE) was once promoted as a means of finding cancer at a more curable stage, however, it has been shown to be ineffective, and is no longer routinely recommended by health authorities for general use. Awareness of breast health and familiarity with one's own body is typically promoted instead of self-exams.
Mammography has a false-negative (missed cancer) rate of at least 10 percent. This is partly due to dense tissues obscuring the cancer and the fact that the appearance of cancer on mammograms has a large overlap with the appearance of normal tissues. 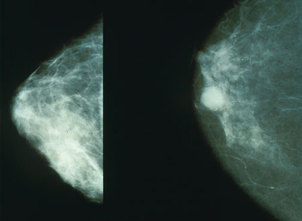 Often women are quite distressed to be called back for a diagnostic mammogram. Most of these recalls will be false positive results. It helps to know these approximate statistics: of every 1,000 U.S. women who are screened, about 7% (70) will be called back for a diagnostic session (although some studies estimate the number closer to 10%–15%).[citation needed] About 10 of these individuals will be referred for a biopsy; the remaining 60 are found to be of benign cause. Of the 10 referred for biopsy, about 3.5 will have a cancer and 6.5 will not. Of the 3.5 who have cancer, about 2 have a low stage cancer that will be essentially cured after treatment. Mammogram results are often expressed in terms of the BI-RADS Assessment Category, often called a "BI-RADS score." The categories range from 0 (Incomplete) to 6 (Known biopsy – proven malignancy). In the UK mammograms are scored on a scale from 1-5 (1 = normal, 2 = benign, 3 = indeterminate, 4 = suspicious of malignancy, 5 = malignant).
Mammography may also produce false negatives. Estimates of the numbers of cancers missed by mammography are usually around 10%–30%. This means that of the 350 per 100,000 women who have breast cancer, about 35–105 will not be detected by mammography. Reasons for not seeing the cancer include observer error, but more frequently it is because the cancer is hidden by other dense tissue in the breast and even after retrospective review of the mammogram, cannot be seen. Furthermore, one form of breast cancer, lobular cancer, has a growth pattern that produces shadows on the mammogram which are indistinguishable from normal breast tissue.

Computer-aided diagnosis (CAD) are being tested to decrease the number of cases of cancer that are missed in mammograms. In one test, a computer identified 71% of the cases of cancer that had been missed by physicians. However, the computer also flagged twice as many non-cancerous masses than the physicians did. In a second study of a larger set of mammograms, a computer recommended six biopsies that physicians did not. All six turned out to be cancers that would have been missed.[10] Generally, CAD systems in screening mammography have poor specificity and compare poorly to double reading.

While data are accumulating suggesting that CAD can find a few additional cancers, this should be put in perspective. The additional find rate was 20%, thus in a group of 10,000 women who will have about 40 cancers, CAD may help find an additional 8. The types of additional cancers that may be found are likely to be early and small.[citation needed] As of 2006, there have been no data to show that finding these additional cancers will have any effect on survival rate. Some feel that these cancers are likely to be found at the next screening, still at a curable stage, and therefore it remains to be proven whether CAD will be eventually found to have any effect on patient outcome.

A study released October 1, 2008, by British researchers revealed that using CAD in conjunction with a single reading by a physician may be as beneficial as a second reading by a physician. The study of 31,000 women, the largest of its kind to date, determined that the find rate for a single physician in conjunction with CAD as compared to two physicians was nearly identical.[12] Out of 227 cancers found, the CAD method found just one fewer than the 199 cancers found using two separate physicians. 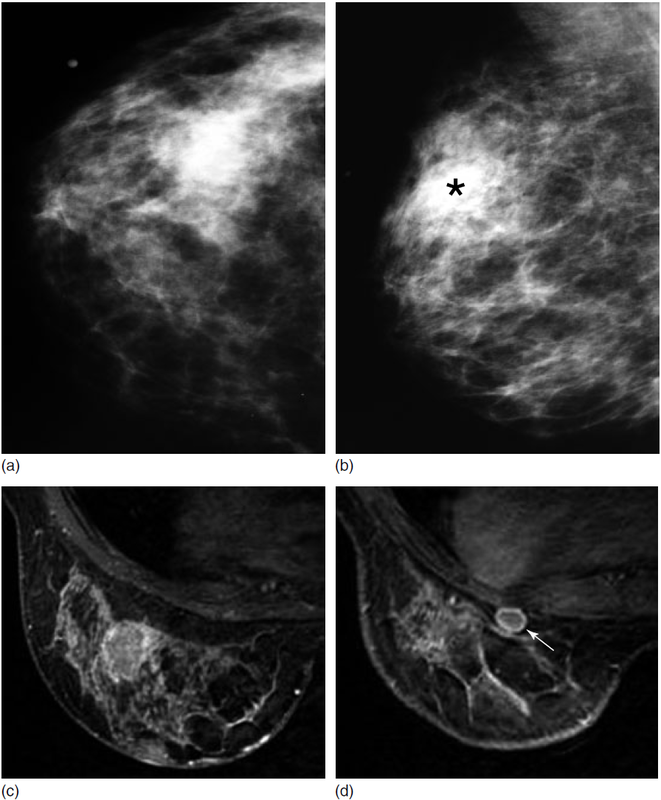 Mammography and MR imaging of the breast. (a) Left craniocaudal and (b) left mediolateral oblique mammograms demonstrate an irregular high-density mass. Overall, breast tissue density is heterogeneous, which is consistent with the patient’s age (35 years). Biopsy results show the mass to be grade III invasive ductal carcinoma. (c and d) Transverse three-dimensional fast spoiled gradient-echo MR imaging was performed to assess remaining breast tissue. (c) Enhancing mass corresponds to the known biopsy-proved breast cancer. (d) Incidental mass (arrow) was found posteriorly in the same breast. Biopsy was performed later with US guidance, and the mass found to be grade I invasive ductal carcinoma. This mass was not evident on the mammogram, either initially or in retrospect. (Image courtesy of Lonie Salkowski, MD, Medical College of Wisconsin, Milwaukee, WI.)